The window unit air conditioner rattled as it desperately tried to keep up with the sweltering humid sticky heat of the Bongolesian afternoon. A recent storm had dropped just enough rain on the Capital City of Bongolesia, which seemed to enhance the mugginess of the heat instead of helping to cool it off like most rainstorms do.
A sudden "WHACK" upon the air conditioner with a stick caused the rattle to stop and the air conditioner continued to struggle to do its job, although in a more silent modus of operation.
Inside, P’hat Daddee B’wonah stared at the air conditioner in silence, holding the stick in his hand and glaring at the window unit as if it were a disobedient child challenging a parent. He waited a moment and when he was satisfied that the air conditioner had learned it’s lesson, he tossed the stick off to the side and turned his chair back towards his desk and the disturbing pictures and reports upon them.
He picked up a black and white photograph and stared at it, frowning slightly. The photo did not have the high detail that he wished he could get from reconnaissance photos, but it had to do. He let his eyes sweep over the photo, taking in every detail. 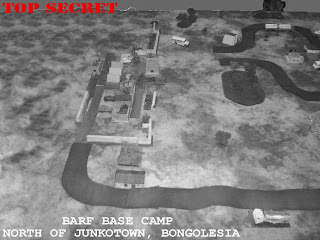 (Secret Aerial Recon Photo of BARF Base Camp near Junkotown...)

He glanced from the photograph to a map of Bongolesia, which showed Junkotown to be in the Central Northwest region of Bongolesia, not far from the border of the CBPR.
Running the tip of his tongue over his lips, he looked again at the photograph.
So they now have tanks… He thought to himself.
His thoughts were interrupted by the buzz of the intercom.
He stabbed at the button with his thick finger as if he were poking a piece of meat. “Send them in.” He ordered.

The door to the office opened and National Defense Minister M’umbow Jumbow, and Bongolesian General B’unga M’bunga slowly stepped in. Each man had the look on their face as if they were marching into the lion’s den.
B’wonah slipped the picture and the reports back into the folder and closed the cover.
“Ah, gentlemen! Do come in and sit down.” He greeted them cheerfully while motioning to the two chairs in front of his desk.
The men slowly moved to the chairs, and after a quick glance sat down in them; M’bunga sitting on the edge of his seat while M’umbow Jumbow’s fingertips dug into the front of the armests.
“You wished to s..see us, Excellency?” Jumbow said with a quiver in his voice.
B’wonah smiled, showing his large white teeth.
“Oh yes, gentlemen. I’ve been waiting for both of you. I need you to tell me some things.”
“Things sir?” M’bunga asked.
The glistening smile vanished as B’wonah stared at them both. “YES! THINGS! I want to know WHAT HAPPENED IN JUNKOTOWN, and most of all WHY DID YOU FAIL TO DO AS I ORDERED?” he bellowed.
“Excellency, I…” M’bunga started to respond before B’wonah made a gesture that shut him up.
“Let’s hear it from the beginning, shall we?”… He said with his dark eyes flashing their black soulless emptiness to them as he leaned forward towards them. 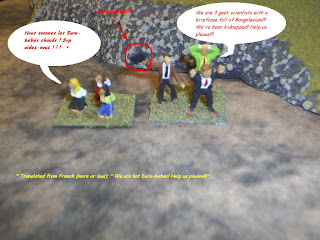 (The objectives, Hot Eurobabes, Geek Scientists, and a briefcase full of Bongolesium!) 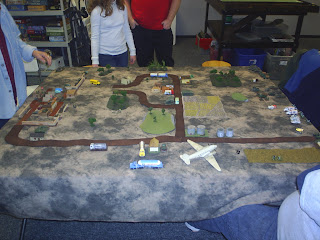 The lay of the land; Junkotown, with the half built airstrip and the BARF stronghold on the left (north) of the table...

South of Junkotown…
The Goomba Flies swarmed thick in the sultry Bongolesian heat as the small town of Junkotown roasted beneath a merciless sun. The sight of a beautiful blue sky gave little comfort to the few villagers as they toiled beneath the blazing orb in the sky. The peasant farmers of the town along with a few townsfolk swatted constantly at the buzzing smelly biting Goomba flies.
Suddenly the local dogs began barking, and the farmers looked up from their cracked drying parched fields to hear and see the dust clouds coming from the south…
“Tanks!” One of the farmers yelled as he dropped his hoe and started running back from the field to the shanty that he and his family called home.

Across the field on the horizon, a cloud of dust moved closer to Junkotown.
Group Captain H’ameneggz sat in the cupola of his T-34/85 clutching to the Old Exxon Road Map, as well as the locally produced map of the region.. His goggles covered his eyes, while a small wrapping protected his face and mouth from the fine ground dust that tanks make, and prevented the unfortunate chance of having a Goomba Fly find it’s winged way into his mouth. He had made that mistake a long time ago, when he was a young officer and learned his lesson as to just how nasty a Goomba Fly tasted. He always made sure never to have a repeat of the lesson.
He looked down at the map, and then to both sides at the rest of his T-34’s. Once again, 2nd Bongolesian, “The Golden Lions”, were on the move. Supported by Infantry in trucks behind, and a jeep recon element racing ahead of them, he looked over to his left. His “supporting element” was the 1st Bongolesian Armored, “The Fighting Jujus”. Armed with PT-76s and truck mounted infantry, their wheeled scout element of armored cars roared ahead of them, looking for signs of the enemy… 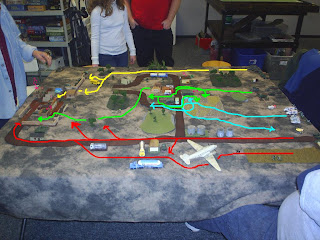 Capi’tan Robespierre of the French United Nations contingent squinted through his binoculars at the dust cloud moving off to his right. He licked his dry cracked lips, and shifted his butt in the jeep seat to a more comfortable position. He tried to ignore the sweat trickling down into his face from beneath his helmet, and instead focused his thoughts on the sight of the Bongolesian vehicles far off in the distance.
Behind him the engines to the UN Trucks and the M113 APC’s idled, adding their exhaust to the thick hot dry air creating a hot carbon monoxide stink that only diesel fuel vehicles in a hot sun can make.
“Sooooooooo….zey t’ink dat they shall get to ze rescue before me and my meeeeeeeen…” He muttered to himself. He tossed the binoculars into the back of the jeep, and grabbed the radio microphone. “Whiyat Kniyat to ze Blue Swallow….Whiyat Kniyat to ze Blue Swallowwwww….come eeeeeen Blue Swallow…”
The radio crackled to life, “Zis is ze Blue Swallow…Ah ahm on ze station…ohverrrrh…”
Robespierre smiled and looked up at the sound of a jet aircraft, high above them in the sky, as it roared about.
Tossing the microphone back to the radio operator, he slapped the dozing jeep driver in the back of his UN blue helmet.
“Wake up you seeeeeelly sol’jier! ALLONS! For-wahrds!” He screamed as the little group proceeded to move across the Bongolesian Countryside. 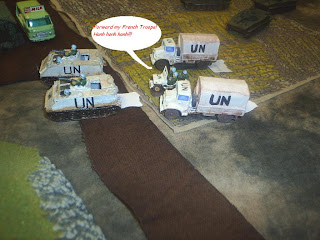 (In the spirit of International Cooperation, and to help their record of goodwill in Africa, The UN contigent decides to get involved...)

West of the UN Group…
“Crikey Major. Them UN Frogs have busted out and are moving fast and ‘eavy for the village.”
Major Dan, “Mad Dog” Merchant, looked up from the map at the soldier observing the UN force in the distance. He squinted his eyes at the small vehicles on the horizon, and nodded in agreement to the soldiers statement.
“Lets get the Marauders moving.” He said with the curtness to his voice that gave orders to the men around him, without him having to verbally give the order. Being a leader of well-trained mercenaries known as “Merchants Marauders”, gave him the benefit of doing just that. Each man was hand picked for the job, and they knew what needed to be done. They were professional soldiers for hire...mercenaries...soldiers of fortune.
Suddenly the two recon jeeps sped forward down the road. Ahead of them lay the Junkotown airport, the BARF stronghold, and their objectives, which meant that they would get paid... 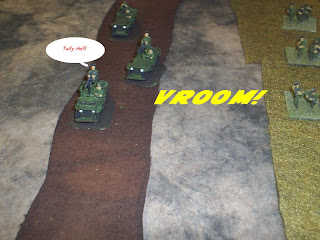 (They saw this on "Rat Patrol", and always wanted to try it!)

Is that a Matchbox Milk Van being stopped by the UN??

Yes it is...one of my little ebay treasures...