So the other day I go to the mailbox...
And it's full of stuff, stuff, bills, and more stuff.
I look at the important things, and then put the "stuff" in my "to be looked at later pile"...
So I'm checking out the pile, and lo and behold...a piece of mail from Stamps.com
addressed to "guess where"... 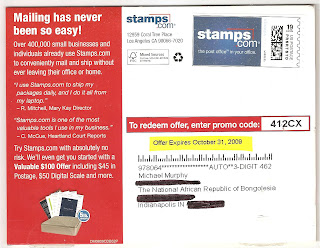 Hmmm...Stamps.com is an approved vendor for the US Post Office.

So, the Post Office is now sending mail to Bongolesia via me?...

Ummm..has anyone told these folks that "It isn't real?"

But wait...if Bongolesia is getting mail...

Then...that could possibly mean that they have identified it as a real nation...

And thus if the US Postal Service is sending mail to Bongolesia, (or at least addressed to Bongolesia), then...

That means that technically Bongolesia has been recognized (in some sort of way), by the US Government!!!!

A: Do I inform them that it isn't real?

B: Do I contact the State Dept, and request to open diplomatic negotiations and possibly request a nice big international aid package???

OMENCORP TO TAKE OVER PERVERTICUS INDUSTRIES OPERATIONS AND FACILITIES IN BONGOLESIA.
LUCRATIVE DEAL MADE.
PRESS RELEASE
For Immediate Distribution

(Sudekia): In a worldwide broadcast this morning, it was announced that OMENCORP, has successfully negotiated the annexation of Perverticus Industries and all operating assets in Bongolesia.
Speaking briefly while on a trip to the Carpathian Mountains in Romania, Omencorp President Lucifer Drake said “This is a great day for Bongolesia, and for Omencorp. “Omencorp has a long, rich, history of working with lesser developed nations, and providing the goods, and services that they need and deserve to get. The people of Bongolesia have made a wonderful and wise choice in assisting with this deal.”
Omencorps name is known the world over as a leading provider in goods, services, and international development projects designed at increasing market shares and developing future market resources for increased profitability.
With its World Headquarters in Brussels, Omencorp has direct business operations in numerous countries and assists in many more. The World Headquarters oversees the continental operations, and each continent has it’s own headquarters which is then sub-routed to the Regional Headquarters for each country that Omencorp works in.
It had been discussed in the past that Perverticus Industries was having problems upholding it’s contract deals with the Bongolesian Govt. and discussions were taking place on the possibility of Perverticus Industries selling their interests in Bongolesia.
Without any further information on the deal, it seems that this may be the case.
“With the current world economic situation and the way things is goin, we needed to look at the alternative situations of what we could do and get.” Said Nat’l Affairs Spokesman Sp'in Dok'tur. “This deal with Omencorp will give the Bongolesian people of our nation what they should all get and ensure that they should get theirs.”
Mr. Drake upon hearing the news from Sudekia, said while nodding and smiling. “I agree! I personally guarantee that we at Omencorp will work our magic in Bongolesia and insure that the Bongolesian Govt, and especially The Bongolesian People get what they deserve…”
Details are sketchy, but information suggests that Omencorp will have initial personnel in country within 2 weeks and scheduled assumption of Perverticus Industries Facilities and Operations will be complete by 1 October.

IN THE INTERNATIONAL MARKET:
Shares of Omencorp rose to 6.66 ($ USD)
Shares of Perverticus Industries fell on the news to 1.87 ($ USD)
Bongolesian Bling-Bling Currency Exchange Rate/Value rose today as a result of the current economic news and industrial announcement to 1 Bling-Bling (BB) = 0.08 ($ USD); a rise of 0.02 since yesterday.

More information on this exciting development as it unfolds!
Posted by Murph at 12:41 PM 1 comment: