(Sudekia): Yes, it's that time of year again, when the ears are up and the eyes are bright and the children of Bongolesia look towards that magic morning when da Eas'ur Bunny leaves them all a gift!
The mornings brighntess are highlighted by the delightful squeals and screams of children as they find delicious and exiciting Easter Eggs hidden among the tall weeds which are usually only inhabited by various species of poisonous snakes, and explosives.
Children of all ages love looking for the brightly colored and marked egg shaped items. Even adults like to get into the act and occassionally compete for the tasty prizes.
"I wait until the kids find a good one..." says a 78 year old grandmother with glee in her eyes..."And then I go for it. Finders keepers ya know!"
A government ministry official though said "Although Easter Egg hunting is encouraged and approved, sometimes the child will find something that while it is egg shaped, isn't as fun or as tasty..."
So the government would like to remind all children, (and parents, and those who just don't know any better), that the following will help them have a safe and happy Easter...

THESE ARE EASTER EGGS... 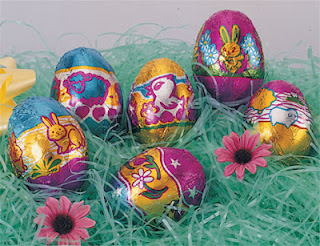 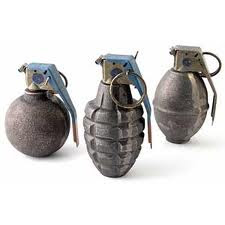 Anyone that finds anything that looks like the above picture are requested to NOT TOUCH IT, and to report it to the local authorities that will come and get it at their convenience.
Enjoy Easter and have a happy day!


NEW PLANES FOR THE BAF???
(Sudekia): Word is coming from the Defense Ministry that the National Goverment is in negotiations for acquiring new aircraft for the Bongolesian Airforce.
"Although nothing has been confirmed yet, the Government has entered talks with Russia on the acquisition of aircraft to expand and enhance the capabilities and readiness of the Bongolesian Air Force."
While it is unconfirmed what aircraft exactly the government is looking at getting, unofficial word is that they have their eyes on two types of Russian made combat planes, the MiG-27 "Flogger-D", and the YaK-38 "Forger" 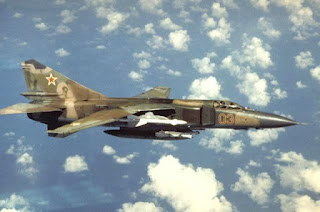 The MiG-27 Flogger-D; a high performance Russian combat plane made for giving enemy ground troops the jiggy...
"This plane is capable of putting the hurt on a lot of those bad guys that want to do badder things to our country than has been done before..." Said a govt. spokesman. "With this plane and properly trained pilots, we can zip down from the clouds and drop bombs on them hitting the targets most of the time and reducing the civilians casualties that occassionally happen when the going gets tough..."

Meanwhile it seems that air-ground attack isn't getting all the fun toys... 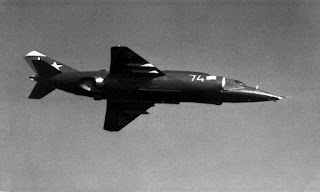 The YaK-38 "Forger" is what is known as a STOL/VTOL, (short take-off landing/vertical take-off and landing), interceptor aircraft, capable of finding the enemy planes and sending them down in flames.
"This is a nice plane, and it's pretty cool that it can go straight up and down. Our pilots will really have to get used to that. But it gives us the ability to even find the enemy and make his day really bad..." the govt. spokesperson said.
Although nothing is confirmed, talks are underway, and we will keep you informed....

Everyone loves the Eas'ur Bunny. Some of the folks actually like Eas'ur Bunny MORE than Sannie Claus. They each give something good to people and the Eas'ur Bunny is known to give up a lot to make people happy and put smiles on their faces...

He just can't wait for the Eas'ur Bunny to show up at the presidential palace! He is looking forward to it! 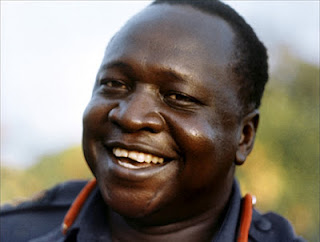 So here's to a Happy Easter for all in Bongolesia!
Posted by Murph at 1:13 PM