I guess to give all of you an idea of exactly "who is who" in our beloved third world African Hell Hole, I decided to get off of my butt and get onto it. This is a simple list of some of the many people and factions that are within the borders of that beleagured land, (and many that affect it from outside).
It gives you a basic program and as they always say "You can tell a player without a program!"
For the first entry I will give you the local government forces. (Civilian Govt. Flunkies will be included in a later post...) 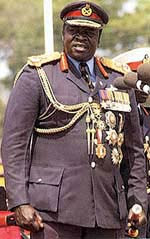 President-For-Life P'hat Daddee B'wonah.
President B'wonah is the supreme ruler dictator of the nation of Bongolesia. B’wonah assumed power of Bongolesia in a military coup in mid 1988 and has maintained an iron grip ever since. He is fiercely nationalistic and usually rails against neighboring countries of differing political views. He is not above being bribed, and his greed and political favoritism is well known in outside world circles. He likes luxury vehicles, beautiful women, prime time TV, and fat bank accounts. Married for the last 25 years to his “beloved” wife; First-Lady-For-Life Moolah B’wonah, they have 2 sons, Ubu and Hummus, (who usually lurk in their fathers shadow and that of the current govt.). He is heavy handed when it comes to political action and usually solves his issues and problems with automatic weapons fire. 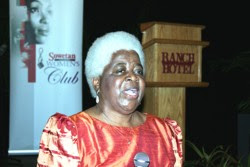 First Lady-For-Life Moolah B'wonah.
M’oolah was the youngest and prettiest daughter of a local village elder chieftan charlatan when she met and became enamored with young P’hat. They were married and P’hat then went on to his career of Personal Petty Power Politics and Procedures Promoted Personally by a Pistol…She is the mother of Ubu and Hummus, and is involved in a plethora of “social causes”, (mostly involving children). She has a large collection of cookware including “cooking pots”, and has been know to make “midnight stews”. So far as from what can be found, the rumors of her cannibalistic preference for small children is pretty much unfounded. 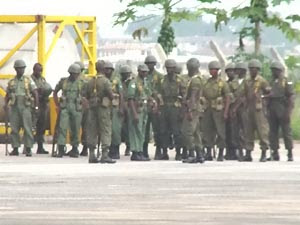 NATIONAL DEFENSE FORCES (NDF) – The Bongolesian Army is officially known as “The National Defense Forces”. This renaming of the military was the first thing that President B’wonah did after coming to power. It was used to give the Army a “fresh start” from their allegiance to the old political regime.
The NDF is broken up into units stationed throughout bases located near the major cities of Bongolesia. The majority of the Army is infantry based, (usually truck mounted), although there are some armor and artillery assets. In 1998, the Bongolesian 1st Parachute Battalion was officially disbanded due to safety concerns. The NDF is sworn loyal to the President and is carefully watched over by the Presidential Guard for “Officers showing disloyalty towards the Govt.” The NDF is equipped with a wide variety of military arms and vehicles including those of Russian/Soviet, French, British, and American Surplus Manufacture, as well as some items of local manufacture. 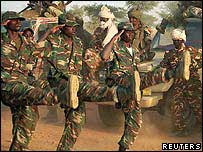 THE PRESIDENTIAL GUARD
THE PRESIDENTIAL GUARD - The Bongolesian Presidential Guard is the Elite Force in the Bongolesian Military-Political scene. The troops are easily distinguished by their unique headgear, and are known as “The Famous Raspberry Berets”. Their equipment is more modern and of higher quality than that of current regular army forces. There is a growing rivalry between the forces of the Presidential Guard and the NDF as NDF troops constantly have to operate in the field, and rely on occasional scavenging to solve their supply and logistics issues, while the Presidential Guard seems to get whatever it is that their little hearts desire (within reason).
ANTI-GOVT, UN, FOREIGN FORCES, ETC. TO FOLLOW...