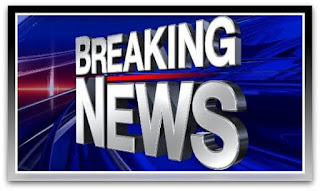 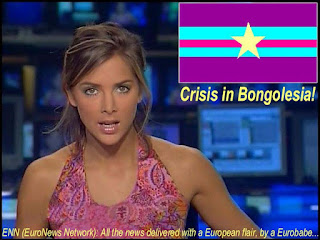 As reported by ENN: (EuroNews Network), "All the news, delivered with a European flair, by a Eurobabe...﻿

Massive multiple explosions erupted within the Bongolesian Capital City of Sudekia this morning as flames poured high into the early morning sky, filling everything around it with a bright orange glow.
Unknown person(s) / Group(s), are rumored to have launched a spirited attack upon government officials and offices within the city, as well as rumors of an attempted assassination attempt upon Ubu B'wonah, the oldest son of His Execellency, President-For-Life P'hat Daddee B'wonah.


The situation is chaotic and fluid within the nation as ALL media (television, radio, internet, and phone) connections have been shut down and there is practically a total media blackout on reporting the current situation on the ground within the capitol city.
Sources from within the country say there is multiple shootings and weapons fire heard within the city, and that Presidential Guard vehicles, National Security and Police equipment, as well as National Defense Force units are operating in full force on the streets of the city.
Some residents are reporting numerous bodies in the streets, and burning buildings as well as the sounds of combat within the city. 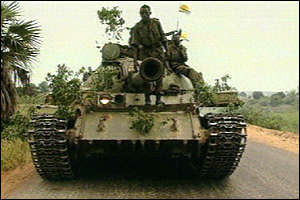 Currently Bongolesian Television is showing the national flag, and playing the national anthem repeatedly, while Radio Bongolesia and Radio Joe are doing the same.
Information is sporadic, but there are numerous rumors of an attempted coup or attack, or something against His Excellency, President-For-Life P'hat Daddee B'wonah, and other government officials.
There are also rumors made of threats against the American Film Icon and Acting Legend Alan Alda, who has been heavily involved in the international scene for Bongolesia.  It has been confirmed however that Mr. Alda is safe and secure in Hollywood, California, USA, and has expressed his concern over what is happening in Bongolesia.
"It's America's fault. I just know it. I bet a dollar against a triple latte that somehow or another Bush is involved!" Mr. Alda was reported to have said.
﻿
﻿

We here at EuroNews Network (All the news brought to you with a European flair, by a Eurobabe!), will keep working on this story as it unfolds...

And now, back to our regulary scheduled program: "Highlights of Great European Cat Shows of the 1970's" with your host, David Hasselhoff...
Posted by Murph at 12:09 PM

Horatio:
He waxes desperate with imagination.

Marcellus:
Let's follow. 'Tis not fit thus to obey him.

Horatio:
Have after. To what issue will this come?

Marcellus:
Something is rotten in the state of Bongoleisa.

Horatio:
Alan Alda will direct it.

The embassy staff in Nova Caledonia offers our prayers and condolences.