Updates from BNN and The Bongolesian Observer (aka "The Old B.O.")

State Funeral for goes off without a hitch!
(Sudekia) In a right nice send off the late Bogoo Moboo, Spokesman for The National Interior Ministry was laid to rest in the soil here in Sudekia today.
Readers will remember that Secretary Moboo, along with his driver, were killed recently in a single vehicle automobile accident in which witness were told that they saw the vehicle traveling at a high unsafe rate of speed and that the driver lost control.
It was a fine and solemn funeral with the local clergy and friends being allowed to talk nicely about the late Mr. Moboo.
“He had a tremendous singing voice, and knew how to talk to people about things that he had to tell them about the Government.” A family member who wishes to remain anonymous said.
After the service, there was a brief interment ceremony at the cemetery and Mr. Moboo was laid to rest.
Services for the remains of his driver were also held in private by his family in another part of the country. The announcement for a replacement for this position should be made shortly. 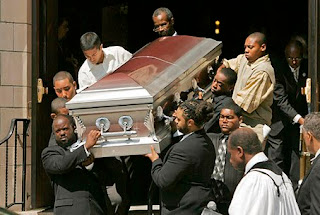 Mr. Moboos coffin being carried out of the church and on it’s way to it’s well-deserved hole in the ground...

(Sudekia): After a long round of working and all-nighters, His Excellency, President-For-Life P’hat Daddee B’wonah has appointed Col. Lok’n Lode as the new district commander for the Bongolesian National Defense Forces.
Col. Lok’n Lode is a loyal leader to The President and has followed orders explicity without question or hesitation. He is a dedicated professional military officer with a high streak of loyalty to our beloved leader and thus, our nation and it’s peoples.
Readers will remember that the position that Col. Lok’n Lode was appointed to was recently vacated by longtime commander General Bunga M’bunga who retired this year after many years of dedicated service.
In a short interview with Col. Lok’n Lode, he issued the statement: “I’m a man of few words, and a lot of action. I like to get a lot of action, as does our esteemed President. I will follow his orders and the people of the nation and the troops of the NDF can rest assured that we will do the right thing.”
It’s a testament to the Bongolesian People of their courage in the face of the Anti-Govt, hoodlums and thugs. But have no fear fair folks! Our beloved boys in green under their new general will soon use their new tanks and other cool stuff that runs and shoots and will show the enemy a newer sharper end of the pain stick! 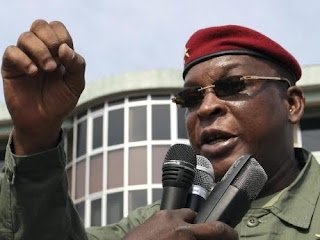 He’ll get jiggy at any time…New National Defense Commander Col. Lok’n Lode answers a couple of questions and makes a statement.

(Sudekia): Unconfirmed word is that the NDF is testing newer tanks in addition to the ones that they have recently received.
With the creation of 3rd and 4th Bongolesian Armored, equipped with the trusty T55 Main Battle Tanks, there is discussion of the possibility of the expansion of the Presidential Guards armor force also.
In doing so, International Arms Dealers from Russia have recently arrived and unloaded two T72 Tanks as display and demo vehicles.
Although the tanks are a bit pricey, and the determination of sales is still underway, there is a chance that one day soon, the people of Bongolesia will see new(er) tanks in the Presidential Guard. 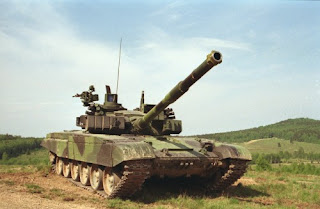 Was Minister Moboo riding in a Toyota Prius by any chance?