European News Network (ENN),"All the news, delivered with a European Flair, by a Eurobabe…"

(Sudekia) Reports are confirming in this African country of Bongolesia of the possible kidnappings of three prominent scientists by anti-govt. forces.Professor Rudolf Von Reinhardt, Professor Art VanDeLay, and Doctor Nigel Percival Incubator-Jones,(All of Perverticus Industries), along with their driver, local native Goh'Speed R'aysur were reported overdue from a research trip into the Bongolesian Outback.A search party found the bullet riddled jeep, along with the bullet riddled body of the late local native Goh'Speed R'aysur, but no sign of the scientists.Speculation and rumor abounded of the fates of the scientists, until unofficial word was received that they were seen alive along with a large container with unknown contents near a BARF military encampent in Northwestern Bongolesia not too far from the border with the CBPR.Government Officals in Bongolesia will not confirm nor deny that the scientists have been kidnapped by anti-govt. rebels. 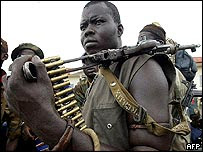 (Anti-Govt. rebels may be the reason behind the missing scientists...)

His Excellency, President-For-Life P'hat Daddee B'wonah has scheduled a press conference concerning the situation later today. He has graciously allowed all European News Eurobabes to have front row seats. More info on this evolving situation as we get it.Now…back to our regularly scheduled program of "Dancing With The Homeless"…