(The first sign and storage tanks of Perverticus Industries in Bongolesia) 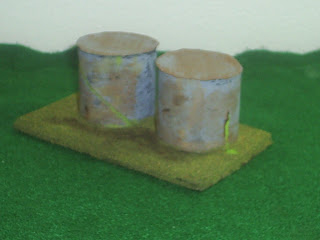 (Really...cut the grass and repaint the tanks and you won't even notice the chemical leakage and seepage...)

From The Ministry of Economic Development, Internal Affairs, and Business Dealings.

(Sudekia) In a major business move that was highly successful for all parties involved, it was announced today in the capital of our beloved nation that global industrial leader Perverticus Corporation has signed a major contract for Perverticus Industries to begin business operations and investments in Bongolesia.

“This is a fantastic opportunity for all of us to get what we want and to bring in some form of something or other for people to do other than standing around all day wanting to do something else.” Said National Economic Dept. Spokesman Werk’nhard Fo’demoney. “This sweet deal will allow Perverticus Industries to come into some areas that need some stuff and give what they can to get stuff done, and we won’t really mind it that much at all. Their checks don’t bounce.”

Little has been reported to the International Community about the business deal, but details have been leaked out that Perverticus Corporation was seeking a new “overseas location” for the establishment of Perverticus Industries, and that due to the current economic and legal issues with the United States and Europe in the fields of Bio-Organic Nutrient Medical Flux Research and Testing, the Corporation felt that it would be “in their best interest” to bring their facilities to a “less developed nation” which would welcome them with open arms, pockets and not put them under as much scrutiny as most first world nations would.

“After that whole business partnership project failure with UmbrellaCorp, and the recent legal issues with Luthorcorp, Perverticus Corporation had a bit of an image problem and worked their people hard to maintain a professional atmosphere of developing high quality stuff for consumers for the right price.” Said Perverticus spokesman Mr. F.N. Stein as he spoke enthusiastically. “This opportunity should allow our Industrial Base to work full speed on what needs to be done and get things taken care of without all the fuss and hassle that the media, pesky investigators and those meddling kids and their dog were giving us.”

Whoo boy, it's been a while since the last release. I've been busy, but the the storage tanks and the sign for Perverticus Industries is finally done!

I've been busy painting figures today, and once this round is done, I will have fifty three (53!) more stands of figs for AK47 Republic bringing my figure stand count to righ under the 200 mark, which will actually be almost halfway to my overall goal of having 500 stands of figures. I count each stand as either:

Now let's just hope that my bases from Litko Aero get in this week!

Let me know what you think about the tanks and the sign.