Now that it seems we have established some basic knowledge of Bongolesia and it's inner workings, some folks have asked me about it's "neighbors"; who are they and what are they, and most of all, what is their relationship to Bongolesia.
So after reviewing all current intelligence info, and perusing old articles from "The Weekly World News", and catching up on my 1987-1988 episodes of "As The World Turns", I've turned my attention to the first of a two parter on Bongolesia's Southern Neighbor; The Mysterious Fandango Republic...
------------
THE FANDANGO REPUBLIC
Beyond the Southern Border of Bongolesia lies The Fandango Republic, (also occasionally known as “The Mysterious Fandango Republic”).
The Fandango Republic (known as “FR” for short in this article), is an African nation that shares a common border with Bongolesia and the CBPR, along with a joint triple border area, as well as a disputed region of coastline of the Great African Sea.
Bongolesian Intelligence officially knows little about the comings, goings, and doings of the FR government, but President-For-Life B’wonah holds them in low regard (as well as his other two neighbors).

SIZE and GEOGRAPHY:
The FR is slightly smaller in land size than Bongolesia but due to it’s geographical location, receives as much rainfall as the Central and Southern Regions of Bongolesia.
The FR does not have the grasslands, desert plateaus, and sub-Saharan geography such as Bongolesia does. Instead, the majority of the country is lush agricultural valleys and gently rolling hills, which have created countless streams, which nourish the soil. Agriculture is the main export in the FR, and the FR govt. is extremely dedicated to successful agricultural production with large amounts of money going towards fertilizers, hybrid grains, etc.
Besides the rich valleys and farmland of the FR, a small mountain range runs on an NW-SE axis along the Southern Border of the country. This mountain range has produced small amounts of gold, diamonds and bauxite, and large amounts of quartz, gypsum, and talc as well.
From the talc and gypsum mines the FR has created perhaps the most successful foot and crotch powder industry in the entire African Continent.
“Uncle Korns Rubbing Powder For Your Feet and What’s Between Your Legs” is sold across the continent and has been a major staple on shelves for the last 10 years.
The coastline of the FR is mostly rocky with beaches of varying size interspersed along the coast. Recently these beaches have become the scene of an increased and dedicated tourist trade focused on bringing foreign tourists (and their currency) to the country. 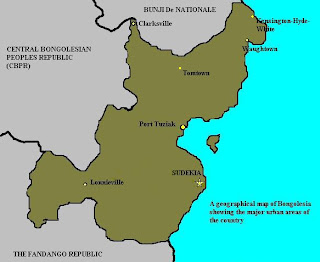 A map showing the shared border of Bongolesia and The Fandango Republic.

Cities and Government;
The Capitol City of The FR is the coastal city of Montalbania (named in honor of Actor Ricardo Montalban), who was dedicated to ensuring that the people of all social classes of the FR had the ability to enjoy rich Corinthian Leather. Due to his popularity with the people in the FR, Ricardo Montalban was awarded The Legion of the Flamingo with crossed scimitars and palm leaves; one of the highest awards in the nation.
Currently due to trade and “cultural differences”; the Bongolesian Govt. jams the TV signals for Fantasy Island that are beamed out of Montalbania. 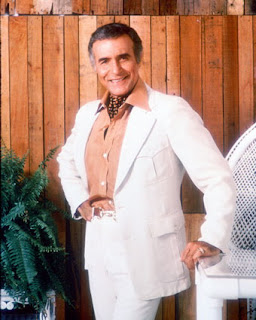 Ricardo Montalban; A Foreign “Citizen of Honor and Hero of the Fandangonian People”…

Besides the Capitol City of Montalbania there are three major cities within the country:

Gulladoon: a coastal city which has the largest harbor facilities in the nation, and is thus the shipping center for import and export merchant vessels. Gulladoon is also home to the nations only “clothing optional beach”…

Bazookalonia: a mid sized city located in the central midlands of the country, this growing city is a major manufacturing and transportation hub for many of the smaller towns and villages in the region. It is the headquarters for The Uncle Korn Company, and added a second rail-line connecting it with Montalban, and Gulladoon.

Wallader: like Bazookalonia is another mid sized city. Located further to the south and not very far from the Southern Border, it is home to the FAF (Fandango Air Force) training center. Due to the close proximity of the mining facilities in the nearby mountain range, Wallader is very much what is known as “A blue-collar town”. Factories, services, and transportation centers are all there to assist with the ores brought down from the mountain. Many young Fandangonian men travel to Wallader looking for jobs.


THE GOVERNMENT:
The Fandango Republic (FR) is technically ruled by a constituonally elected parlimentary majority with a party elected “National-Premier” as the head of the Govt.
The Premier’s term is only interrupted once every six years for a mandatory election, or when his party ousts him, or the opposing parties are able to garnish enough legislative support to force a constitutional vote of confidence. In theory a majority vote of “no confidence” is enough to force new elections within two weeks, however with the current political majority ruling the country for the last 14 years and keeping the opposing parties divided and weak, a no-confidence vote is unlikely anytime soon.

Part II to be continued...

Awesome and where the heck is my subscription to the Ol' B.O.

Dear Sir;
We here at The Bongolesia Observer assure you that your subscription is safe and sound and you will be receiving all the B.O. you and others around you can handle real soon...
We want you to have nothing but the best B.O. for you.

Sincerely;
The Staff at The Bongolesian Observer...