The Bongolesian Air Force (BAF), is the primary (and only) military air arm of Bongolesia.
While the Army uses helicopters in some of their ground combat operations, it is the responsibility of the Air Force undertake operations of Air Combat, Air to Ground Combat, and Air Transportation and Support during military operations.
Due to the economic budgeting issues of Bongolesia, the Air Force is strapped with old (one could say "venerable") equipment; much of which would seem to be more at home on display in museums that taking to the skies in this day and age.  The age of the aircraft, plus the wide variety of planes, would be a small mechanical, and logistical support nightmare for any first nation air force; however Bongolesia, in true and typical Bongolesian style, does indeed seem to "somehow make it work".

The BAF is set up in a rather small manner. BAF Headquarters is located in Sudekia at the military section of Bomb'a De Plane Airport (also known as Sudekia International). A small military enclave at the end of the terminal for the Civilian Flights is the Headquarters and 1st Fighter Squadron.

Headquarters Bongolesian Air Force: (HQBAF): Oversees all operational and command decisions for the BAF. This is to include training, planning, air operations, and support missions essential to the air defense of the nation.
In the administrative section alone, one can hear the typewriters clicking all day as orders are made, and papers are typed.

Training Command Bongolesian Air Force: (TCBAF): On orders from HQBAF, oversees all personnel training and assignment operations, to include pilot, ground crew, support, flight, and weapons training.
With the exception of officers, all BAF personnel take 3 weeks of basic training at Camp Kill'em'all on the outskirts of Sudekia. This training includes, wear of the uniforms, drill and ceremonies and how to march in step, basic weapons training, emergency training, etc.  Upon successful completion of basic training, new airmen are assigned to their respective units for the job requirement advance training.
Pilots/Officers undergo a different type of training (to be discussed at a later date). 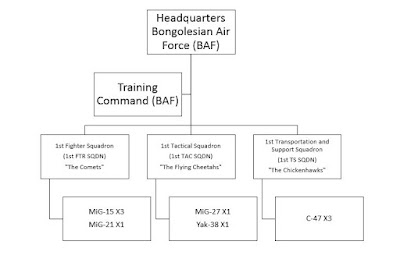 1st Fighter Squadron (1st FTR SQDN), is stationed at Sudekia International Airport in Sudekia (also known as "Bomb'a De Plane" Airport), and is responsible for overall air to air operations and air superiority for the nation.
The Squadron currently employs three (3) MiG-15 Fighters and one (1) MiG-21 that in full force is used as a flight leader and coordinator for the MiG-15's.  Future plans are for the MiG-15's to be eventually replaced completely with MiG-21's, and currently Bongolesia is beginning to have issues getting replacement parts for the aircraft as North Korea seems to be hogging them.

While this unit is designated and sanctioned with the mission of provide air to surface strike capability in air force operations, it currently is unable to perform these as both aircraft assigned to it for these missions are in various states of maintenance and disrepair. The Yak-38 is even considered by some to be a "bad luck" jet. It will be a matter of time before this squadron is ready.

This unit is responsible for moving personnel and supplies from one point to another. Using the C47 aircraft (one of which is also used by Bongo Air as their official airliner), This unit is able to easy land on the more worn and less capable runways, (Lonnieville and Tomtown for example).

Based on these hindrances air systems analysts believe that the BAF is currently no real threat or even match for any major national air wing that is operating in the area. A full force on force action with 2 USN F-18's would result in the entire BAF Fighter Squadron being easily swatted out of the sky.
However, there are always "lucky shots", and the BAF is dedicated to improving their capabilities.
Posted by Murph at 2:16 PM

Looking forward to seeing future growth and operations of the BAF.

This is a very useful information, thanks for shared.
คาสิโนออนไลน์!
บาคาร่าออนไลน์!
ฟุตบอลออนไลน์!
หวยออนไลน์!

It is a good article and very interesting in .. Thank you for your knowledge of it.

Gclub online casinos Game Center Online Baccarat In the form of live broadcast, straight from G Club Casino, Poipet, Cambodia Open a full range of casino games such as Baccarat, Insurance, Hi-Lo, Roulette, Tiger, Fantan and online slots. Can join in many fun ways Whether playing in G Club via the webpage Or to play mobile Gclub that supports both Android and iOS systems. We also have services G Club entrance The newest update provides 24-hour deposit and withdrawal services with a professional team. จีคลับบาคาร่าTherefore, you can be assured of the speed and safety. Open a new fun experience with us today.

Very much impressed with this post.
Please do find the latest Spotify

Gclub online casinos Game Center Online Baccarat In the form of live broadcast, straight from G Club Casino, Poipet, Cambodia Open a full range of casino games such as Baccarat, Insurance, Hi-Lo, Roulette, Tiger, Fantan and online slots. Can join in many fun ways Whether playing in G Club via the webpage Or to play mobile Gclub that supports both Android and iOS systems. We also have services G Club entrance The newest update provides 24-hour deposit and withdrawal services with a professional team. รอยัลออนไลน์Therefore, you can be assured of the speed and safety. Open a new fun experience with us today.

This is also a very good post which I really enjoyed reading. It is not every day that I have the possibility to see something like this .. CBD