Now that we've established the force makeup for BARF, I thought I would sit down and get the NDF units (yes, units as in plural), up and on the site.
These will show the general TO&E of 1st and 2nd Bongolesian.

FIRST BONGOLESIAN:
The 1st Bongolesian Combat Force (1 BCF) is a combined/mixed combat element, and is one of the two mainstay units within the National Defense Force. Currently stationed and based out of Camp K'illemall in the capitol city of Sudekia, the overall mission of 1BCF is to provide defensive/military security against any enemies to the country, foreign or domestic. On paper it's planned to be able to "work with" the Presidential Guard, however there seems to be a growing rivalry between the PG forces and the NDF troops.
1BCF currently contains the following:
*1st Bongolesian Armored (PT-76's): "The Fighting Jujus"
*1st Bongolesian Recon (mixed): "Roaring Cheetahs"
*2 units of truck mounted infantry with support weapons attached.
*1 section of truck carried heavy support weapons, (including 2 mortars, 1 HMG, and a truck carried ZPU autocannon)
*1 heavy AT asset (MT-12 100mm AT gun) with M3 Halftrack prime mover. 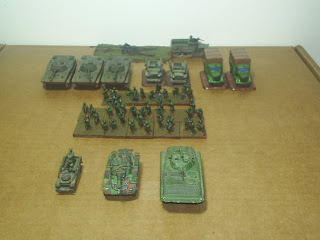 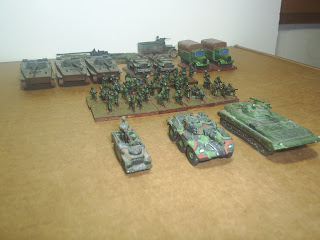 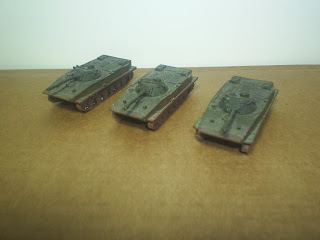 1st Bongolesian Armored: "The Fighting Juju's"....This (in)famous unit is well know for it's aggression and has been known to attack non-discriminately. Rumors of it going on bloody rampages have circulated for years, but proof of such rampages is always dubious at best. The PT-76's allow the unit to have good firepower and manueverbility, along with amphibious operational capability which can help with the capitol city being located on a shoreline...
SECOND BONGOLESIAN:
The 2nd Bongolesian Combat Force (2BCF) is currently stationed North/Northwest of the capitol city of Sudeka and is under order to maintain security for the interior between Lonnieville, and Port Tuziak. Currently stationed at "Base Camp Zebra", 2nd BCF has seen a drastic shift downward in morale lately. This is probably due to the fact that the 2nd BCF suffered trememdous losses at Junkoville from enemy and friendly fire from "The Fighting Jujus". 2nd BCF was a favored unit of recently retired Gen'l Bunga M'Bunga, and with his exit, and the arrival of newly promoted Gen'l Lok N' Lode, the overall effectiveness of 2nd BCF seems to have diminished.
2BCF currently contains the following:
* 2nd Bongolesian Armored (T34/85's): "The Goldien Lions"
* 2nd Bongolesian Recon:(mixed): "The Condors"
* 2 units of truck mounted infantry with support weapons attached.
* 1 section of truck carried heavy support weapons, (including 2 mortars and 2 HMG's).
* 1 "Heavy Support Weapon Asset" consisting of a ZSU-57-2 which provides both air and ground fire support. 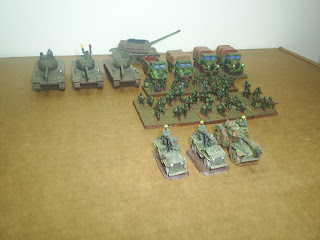 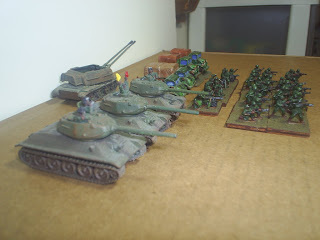 2nd BCF with 2nd Bongolesian Armored "The Golden Lions", and their venerable but trusty T-34/85's up front. In this photo you can also see the ground troops and support weapons as well as the ZSU-57-2... 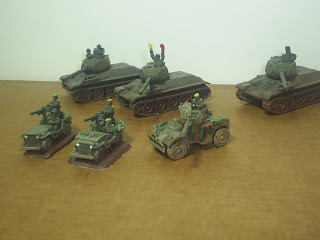 2nd Bongolesian Recon, with their 2 gun jeeps and Panhard armored car along with 2nd Bongolesian Armored. These two units have worked very well in the past and form the backbone of 2nd BCF. 2nd Recon has a proven track record of locating and engaging the enemy, (real or imagined)...

Excellent... Suppose I should do a write up on the Marauder's for you to add.. -submits yet another complaint about the late or should I say not at all delivery of the Ol'B.O. which I payed my bling bling for.