From ENN: "All the news with a European flair...delivered by a Eurobabe..." 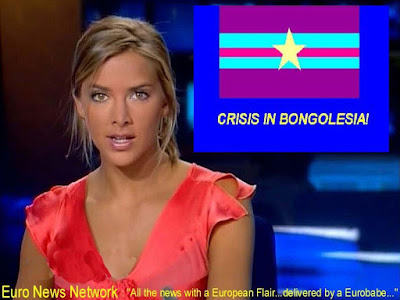 International Crisis and Accusations on the Border!!!

(ENN): "UN diplomats today in general meetings were in a complete tizzy over the recent events, accusations, and name calling, between the UN Representatives of Bongolesia and The Fandango Republic.

Earlier in the day the representative of The Fandango Republic (FR), disclosed in a meeting "pretty solid evidence", as he said that, "The nation of Bongolesia had established an intelligence gathering and collection facility in the local urban area known as Bungatown, and that said facility was carefully and cleverly disguised as a place of business known as "Charlie's Chicken Farm", (CCF)."  The representative of the FR also added that "It is now well known that Bongolesian Intelligence sources are illegally gathering intelligence information on our nation, (The Fandango Republic), in order to prepare for possible aggressive, warlike operations against our peace loving nation."

The UN monitors the border between Bongolesia and The Fandango Republic and maintains what is commonly known as "Checkpoint Chester", (Named after an obscure English Ornithologist, (Chester Wellerfuller, that was reportedly eaten by hyenas in 1907)...

UN administrators report that the Bongolesian representative listened to what was called "The wild and crazy guys and their outlandish claims." and ended their reply with some obscene hand gestures directed toward the FR representative.

Words were then passed back and forth, despite the UN council heads calling for order and starting to cry when no one would listen to him or take him seriously.

The Bongolesian representative ended his reply with "...AND your bald headed Uncle Johnny, AND the horse you rode in on!!!!", before their delegation stormed out of the room.

We here at ENN will keep you updated on the issue and will give you updates as they happen."

Been out of the loop for some time and returned to find that "You can't get there from here" if you want to visit Zagoria.

Yes sadly enough, Lars took the Zagoria site down a few years back....

Makes me want to get my stalled project going again.

Mélissa Theuriau! I could watch her for hours not understanding a word.

I am glad to see that your web site share valued info that can assist to several readers.
For more information visit
wordpress
ufa88kh.blogspot
youtube
កាស៊ីណូ

Thank you for broadcasting it. It's very good