Well it's been a bit since my last update. Real world stuff has one again reared it's head and my new job is keeping me busy. But with that in mind, I thought I would give some updates on my latest work on the ol' workbench.
So without further eloquence: 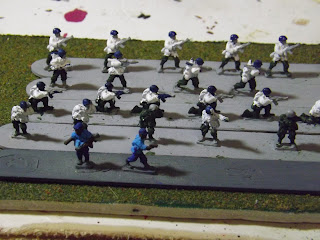 I had originally planned on giving them dark blue tops and helmets with military green trousers but the color coordination was absolutely atrocious.
So I went back and looked at some real world naval infantry pics, and decided to go with the black helmet, white top, black trouser look. The Chinese really have the outfits down...
I'll be posting more on them as I finish them, but wanted to give you a little taste of what to expect.

So every country, (even corrupt ones) needs a police force right?
So why not Bongolesia?
That's right! The nation now has it's very own standing police force. (Currently on the table, 4 figures and 1 car), but hey, ya gotta keep the citizens in line right?
This WIP will be finished soon I hope. I plan on adding a few more figs and vehicles, but they shouldn't be much of a force to be reckoned with. 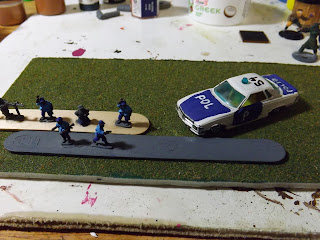 *Cue the theme music from "Hill Street Blues"....Keeping law in order (from their point of view), on the streets of Bongolesian Cities.

Let's be careful out there, okay?

Why should Bongolesia have ALL the fun??
It's well known that our beloved nation has enemies.
Among them is their "neighbor" (in geographic terms only), to the South; that mysterious nation known as "The Mysterious Fandango Republic".(MFR)
And it's only natural that sooner or later the MFR is going to show some muscle along the border.
Hence 1st MFR Armored and their M24 Chaffee tanks.

The M24's for the MFR have been mechanically upgraded with better performance engines, although the tank is essentially the same as it's WWII counterpart. It's lightweight, high-speed and maneuverability in the difficult terrain of the MFR/Bongolesian border makes it an excellent armored vehicle. The 75mm gun gives enough "umph" without being unwieldy and overpowering. 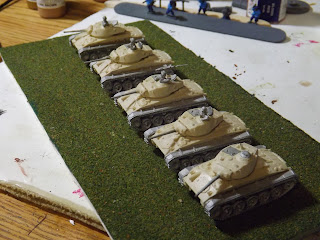 Not quite yet ready for action...But I soon think that we will be seeing more from this group...

So that's currently it for what I am working on.
I'm hoping to finish up some stuff and run a small game by late April-early May. Origins is coming up fast....