UN situation....should they get bullets? 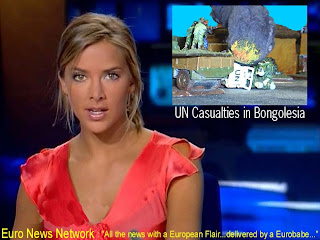 From ENN broadcast: "Meetings by UN officials on the situation last week in Bongolesia that led to the deaths of three UN observers were held this morning at the UN African Affairs Office in New York City. While no official word is out yet, there are rumors going about of a soon to be emplaced change of command. There is also possible word that UN soldiers, (even the French ones), will be allowed live ammunition and the ability to shoot back.
While it is unclear of what this means to the overall UN mission in Bongolesia, analysts can only say "Good Gawd...it's gonna git worse..."

Next up...local sports scores and the recent issue in Italy involving a 95 year old crossdressing sailor that thinks that he's Mussolini....but first...these words from our sponsor..."
Posted by Murph at 11:43 PM

Great work Murph. And I agree with youcabout QRF.

Thanks..I just sent QRF an email about some issues with their Mi-24 Hind...